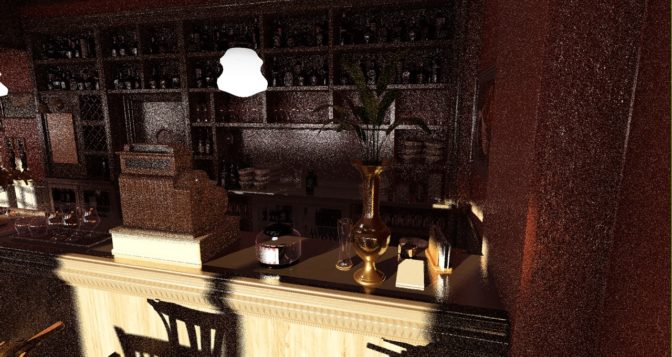 Anyone who’s taken a photo with a digital camera is likely familiar with a “noisy” image: discolored spots that make the photo lose clarity and sharpness.

Many photographers have tips and tricks to reduce noise in images, including fixing the settings on the camera lens or taking photos in different lighting. But it isn’t just photographs that can look discolored — noise is common in computer graphics, too.

Noise refers to the random variations of brightness and color that aren’t part of the original image. Removing noise from imagery — which is becoming more common in the field of image processing and computer vision — is known as denoising.

Image denoising uses advanced algorithms to remove noise from graphics and renders, making a huge difference to the quality of images. Photorealistic visuals and immersive renders could not be possible without denoising technology.

In computer graphics, images can be made up of both useful information and noise. The latter reduces clarity. The ideal end product of denoising would be a crisp image that only preserves the useful information. When denoising an image, it’s also important to keep visual details and components such as edges, corners, textures and other sharp structures.

To reduce noise without affecting the visual details, three types of signals in an image must be targeted by denoising:

To create the clearest image, a user must cast thousands of rays in directions following the diffuse and specular signals. Often in real-time ray tracing, however, only one ray per pixel or even less is used.

Denoising is necessary in real-time ray tracing because of the relatively low ray counts to maintain interactive performance.

How Does Denoising Work?

Spatial filtering selectively alters parts of an image by reusing similar neighboring pixels. The advantage of spatial filtering is that it doesn’t produce temporal lag, which is the inability to immediately respond to changing flow conditions. However, spatial filtering introduces blurriness and muddiness, as well as temporal instability, which refers to flickering and visual imperfections in the image.

Temporal accumulation reuses data from the previous frame to determine if there are any artifacts — or visual anomalies — in the current frame that can be corrected. Although temporal accumulation introduces temporal lag, it doesn’t produce blurriness. Instead, it adds temporal stability to reduce flickering and artifacts over multiple frames.

Machine learning and deep learning reconstruction uses a neural network to reconstruct the signal. The neural network is trained using various noisy and reference signals. Though the reconstructed signal for a single frame can look  complete, it can become temporally unstable over time, so a form of temporal stabilization is needed.

Denoising provides users with immediate visual feedback, so they can see and interact with graphics and designs. This allows them to experiment with variables like light, materials, viewing angle and shadows.

With NRD, developers can achieve real-time results using a limited budget of rays per pixel. In the video above, viewers can see the heavy lifting that NRD does in real time to resolve image noise.

Popular games such as Dying Light 2 and Hitman III use NRD for denoising.

NRD supports the denoising of diffuse, specular or reflections, and shadow signals. The denoisers included in NRD are:

The post What Is Denoising? appeared first on NVIDIA Blog.