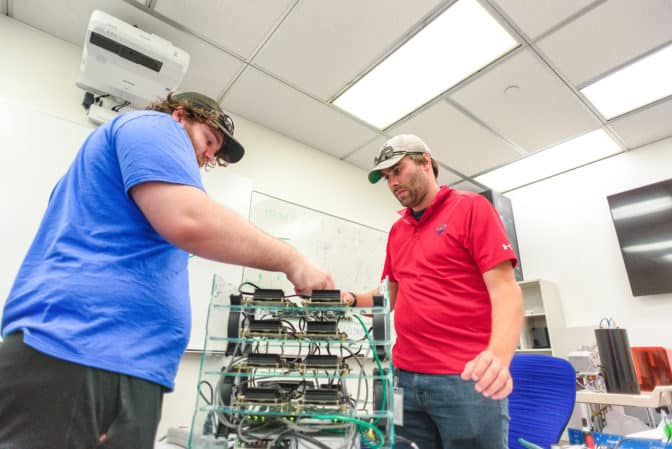 The project, dubbed SMU’s “baby supercomputer,” aims to help educate those who may never get hands-on with a normal-sized supercomputer, which can sometimes fill a warehouse, or be locked in a data center or in the cloud.

Instead, this mini supercomputer fits comfortably on a desk, allowing students to tinker with it and learn about what makes up a cluster. A touch screen displays a dashboard with the status of all of its nodes.

“We started this project to demonstrate the nuts and bolts of what goes into a computer cluster,” said Eric Godat, team lead for research and data science in the internal IT organization at SMU.

Next week, the baby supercomputer will be on display at SC22, a supercomputing conference taking place in Dallas, just down the highway from SMU.

The SMU team will host a booth to talk to researchers, vendors and students about the university’s high-performance computing programs and the recent deployment of its NVIDIA DGX SuperPOD for AI-accelerated research.

Plus, in collaboration with Mark III Systems — a member of the NVIDIA Partner Network — the SMU Office of Information Technology will provide conference attendees with a tour of the campus data center to showcase the DGX SuperPOD in action. Learn details at SMU’s booth #3834.

“We’re bringing the baby supercomputer to the conference to get people to stop by and ask, ‘Oh, what’s that?’” said Godat, who served as a mentor for Conner Ozenne, a senior computer science major at SMU and one of the brains behind the cluster.

“I started studying computer science in high school because programming fulfilled the foreign language requirement,” said Ozenne, who now aims to integrate AI and machine learning with web design for his career. “Doing those first projects as a high school freshman, I immediately knew this is what I wanted to do for the rest of my life.”

Ozenne is a STAR at SMU — a Student Technology Associate in Residence. He first pitched the design and budget for the baby supercomputer to Godat’s team two summers ago. With a grant of a couple thousand dollars and a whole lot of enthusiasm, he got to work.

Birth of a Baby Supercomputer

Ozenne, in collaboration with another student, built the baby supercomputer from scratch.

“They had to learn how to strip wires and not shock themselves — they put together everything from the power supplies to the networking all by themselves,” Godat said. With a smile, he added, “We only started one small fire.”

The first iteration was a mess of wires on a table connecting the NVIDIA Jetson Nano developer kits, with cardboard boxes as heatsinks, Ozenne said.

“We chose to use NVIDIA Jetson modules because no other small compute devices have onboard GPUs, which would let us tackle more AI and machine learning problems,” he added.

Soon Ozenne gave the baby supercomputer case upgrades: from cardboard to foam to acrylic plates, which he laser cut from 3D vector files in SMU’s innovation gym, a makerspace for students.

“It was my first time doing all of this, and it was a great learning experience, with lots of fun nights in the lab,” Ozenne said.

A Work in Progress

In just four months, the project went from nothing to something that resembled a supercomputer, according to Ozenne. But the project is ongoing.

The team is now developing the mini cluster’s software stack, with the help of the NVIDIA JetPack software development kit, and prepping it to accomplish some small-scale machine learning tasks. Plus, the baby supercomputer could level up with the recently announced NVIDIA Jetson Orin Nano modules.

“Our NVIDIA DGX SuperPOD just opened up on campus, so we don’t really need this baby supercomputer to be an actual compute environment,” Godat said. “But the mini cluster is an effective teaching tool for how all this stuff really works — it lets students experiment with stripping the wires, managing a parallel file system, reimaging cards and deploying cluster software.”

SMU’s NVIDIA DGX SuperPOD, which includes 160 NVIDIA A100 Tensor Core GPUs, is in an alpha-rollout phase for faculty, who are using it to train AI models for molecular dynamics, computational chemistry, astrophysics, quantum mechanics and a slew of other research topics.

“There are applications for AI everywhere,” Ozenne agreed.

Learn more from Godat and other experts on designing an AI Center of Excellence in this NVIDIA GTC session available on demand.

Join NVIDIA at SC22 to explore partner booths on the show floor and engage with virtual content all week — including a special address, demos and other sessions.